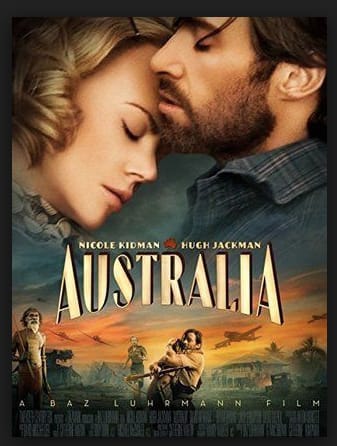 In the movie, Australia (2008), (director Baz Luhrmann) is a little boy, Nullah, who says that his people invented many names for the land that white Westerners called Australia.

The natives saw the complexity and magic of their land and nature as a whole, which is

unfortunately forgotten in some Western countries. Based on their spiritual vision, aborigines invented several names for Australia.

So, Nullah believes that this is a land with many spirits, and therefore it needs a shaman.

Ms. Ashley is another main protagonist in the movie.

She has developed Courage. Since Courage is the intangible value of Light, the lady is a spiritual being moving toward Light.

Drover, a freelance entrepreneur, doesn’t want to be hired by anyone because any money, property, or ownership could one day be lost. Therefore he developed a high value for his Freedom. Since Freedom is an intangible value of Light, the man is a spiritual entity moving towards Light.

There are also representatives of Darks in the film. Neil Fletcher is one of them. A cold-blooded killer, he carefully and cunningly sweeps his tracks. That is, he is a mature spiritual being who has long chosen Darkness in past lives.

The church in this movie is shown as an administrative servant of a political decision.

As a result, the church takes the metis-kids from their mothers and gives them the training to serve white people.

All the main characters in “Australia” are very appealing, but the true hero is King George, a Nullah’s grandfather. He is also the shaman of the land.

The old man truly takes care of Nullah, and he is always next to him, visible or invisible.

The shaman shows equanimity in all circumstances.  Therefore, his mind is always in the Power of Now**.

For example, the man’s face is peaceful when his grandson faces danger from crazy bulls. And further – in moments of happiness, when Nulla is alive and well.

You can see him calm, whether during peace and war, when surrounded by nature, or when the police send him to prison.

a spirituality of natives

So, a true winner in this story is King George.

Therefore, it is natural to see that Nullah continues his life journey with his extraordinary grandfather.