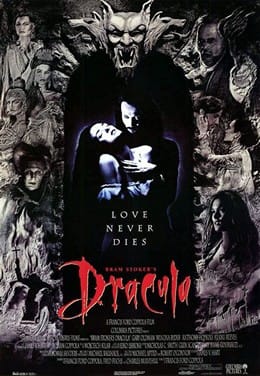 A key phrase in Dracula (1992), directed by Francis Ford Coppola, is Spiritual choice towards Darkness.

The protagonist, Count Dracula, has a high energetic potential. He is a ruler of his land as well as a commander on the war field.

He married the beautiful and faithful woman who waits for his return from the war.
As he fights for his God, his beloved wife gets a frightful message about his death. Mourning for her admired husband, she commits suicide.

Returning Graf Dracula is terrified by the death of his wife. His consciousness is high enough to understand that everything is dependent on God; however, he doesn’t realize that the end of his wife is a Spiritual Choice for him.

His irritated non-controlled mind generates anger, a search for a guilty one, and as a consequence, hatred towards God. Driving by strong emotions, he rebelled against the highest Light, i.e., God, and fulfilled himself with the darkest energies.

When a human has the Highest possible energetic potential, his choice towards Light could bring him to full liberation, and the choice towards Darkness makes him a Demon.

For example, if Count Dracula accepted his wife’s death, this would lead him to the direction of Light and further greater enlightenment opportunities.

However, the ending of the film is positive.
Dracula, intuitively seeking redemption from his suffering, found a woman who’s unconditional love gives him a second chance.

The managing part is our unconsciousness, which works as massive storage of everything that happened in the humans past during all incarnations. The negative and positives parts are responsible for consciousness, i.e., the present moment.

The average person keeps negative and positive parts in balance. However, a Spiritual choice pushes a person to choose either of two directions – Light or Darkness. A Spiritual Choice towards Darkness will enlarge a negative part of the soul, and a Choice towards Light will increase a positive element.