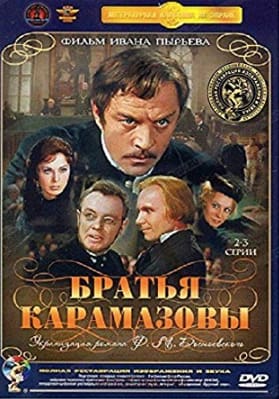 This is a review of the movie The Brothers Karamazov (1969)  based on the novel by F. Dostoevsky (original title Bratya Karamazovy).

Most of the discussions taking place throughout the film are highly spiritual and contain such topics as faith in God, the existence of the soul, bad and good acts, etc.

All the main characters take part in those discussions. However, Ivan, the oldest of the Karamazov brothers, has the most important role in the story due to his free thinking.

Ivan’s mind is polluted by atheism; thus, his linear thinking does not perceive God’s world.

Feeling separated from others (i.e., other beings), Ivan continuously expresses his anti divine ideas; for instance, he promotes full rights for any action without punishment; in other words, he denies the Universal Law of Cause and Effect.

The youngest of the Karamazov brothers, the devout Alyosha, calls Ivan’s mental statement “hell in mind” and questions how Ivan can live like that.

Footman Smerdyakov is another “dark” personality in the story.

His dream is to get 3,000 rubles belonging to his master (Ivan’s father). As a result, he stumbles upon Ivan’s concept that “you can do whatever you want because there is no God or immortal soul”.

Being Ivan’s father’s servant, Smerdyakov plans to get the money, but he is too afraid to cross a line – killing his master. Smerdyakov needs someone to approve of the murder, and Ivan, with his high density of consciousness, seems like the right person for this purpose.

gateway to the soul

Although Ivan does not declare his approval of Smerdyakov’s plan, a glance is enough for the footman. What he reads in the eyes of Ivan gives him the green light to kill.

A mental wish for his father’s death leads Ivan to even more pollution of his mind. As a result, he mentally approaches the Darks’ spiritual realm and meets a demon. Even with a demon, Ivan continues his dispute about a spiritual world’s reality, denying God’s existence, and doesn’t give up his disbelief.

However, the end of the story clarifies how Ivan was wrong.

The unconscious fear of the coming karma and pangs of conscience force Smerdyakov to give away the stolen money and commit suicide. This action would help him reduce the negative karma’s heaviness, which has already started its punishment.

Ivan, bringing the money to the court, accuses himself of his father’s murder but cannot get rid of the demon.

In conclusion, every action in the physical world follows a mental statement – a thought, which is a product of a mind.

This is a must-watch movie for any spiritual seeker!