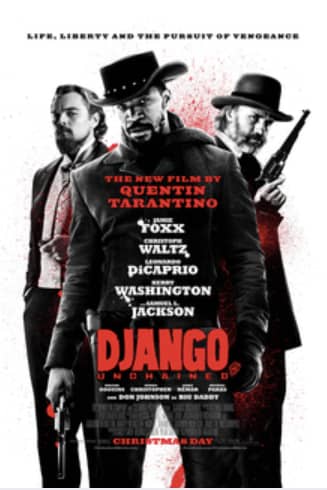 There are several keywords in the movie Django Unchained (2012), director Quentin Tarantino.

All of them belong to the main protagonist Django. The words are:

These highest intangible values towards Light are the keys to what we would call luck or success in Django’s efforts to rescue his beloved wife.

There are dark characters in the film as well. The most “appealing” is Calvin Candie, the slaves’ owner.

Showing unreasonable cruelty to his slaves (i.e., the scene of his dogs hounding a fugitive slave), he is a typical representative of Darkness. As a result, these qualities naturally make him an enemy of Django (slavery* vs. freedom, Light vs. Darkness).

With the biggest sin of humans being  – pride, the scene featuring the conspiracy talk between Candie and his faithful servant Stephen could be much stronger if, instead of “I spent so much time with them for no results,” Candie had emphasized his worries about his pride and told his faithful servant, “They wanted to fool me? Me myself?”

Django won over Candie. That is to say; Light overcomes Darkness.