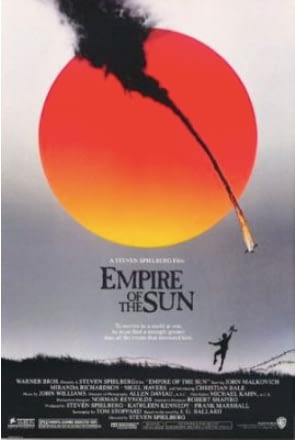 “Empire of the Sun (1987)“, director Steven Spielberg, is an amazing historical movie with spiritual elements.

The main protagonist, Jamie Graham, is a high-society British boy.

A destiny drops him into the harsh environment of Shanghai during WW2. As a result, he has to ensure his survival.

The director of the film, Steven Spielberg, introduced a well-made mixture of four cultures – Japanese, Chinese, British, and American. Thus, we can observe patterns of behavior and nuances characteristic of each nationality.

Meanwhile, the viewers enjoy the magnificence of the Shanghai metropolis and experience the tragedy of civilians faced with wartime brutality.

However, the most remarkable thing in this movie is Jamie (outstanding play of young Christian Bale).

Possessing rich spiritual awareness and wisdom, he tells his mother that God played tennis in his dream.
Therefore, he doesn’t need a belief in God; he knows that he exists.

Also, Jamie assumes that if people can see God in their dreams, God also sees people in His dreams.

Above all, Jamie not only has his own opinion, but he also has his vision.

While adults, using analytics and statistics (logic), calculate the potential outcome of the war on the number of people and weapons, Jamie, from his higher level of consciousness, notes that someone who has Courage will win the war and that Courage is a national value of the Japanese (visioner).

Further, separated from his parents, Jamie tries to survive in the new situation.
Hunger is a driving force for the boy, and he looks for opportunities.

Gut’s feelings help Jamie escape from a bigger evil – a Chinese street boy – and join a smaller one – an American pragmatist Basie.

Basie shares rice with Jamie not because of compassion but a cold calculation – to sell the boy for a profit (slavery is a Darks’ feature). But fortunately, Basie’s plan failed.

Meanwhile, death is all around, and Basie teaches Jim (Jamie’s nickname) to get opportunities even from the dead, whether it be an extra potato or a pair of shoes.

However, the art of surviving is an intensive life lesson to Jamie, and therefore at the spiritual level, the boy gets an upgrade of his energy potential.

The energy potential is so high that Jamie even manages to save several lives!

After that, we see the atomic bomb’s explosion in front of Jamie’s eyes.
The boy – an artist, compares the flash of it with the snapshot done by God.

However, the end of the movie is happy – Jamie is reunited with his parents.

Summing up, the “Empire of the Sun (1987)” based on a true story, is a great film with spiritual elements to be watched by the whole family.

See my rating on IMDb.