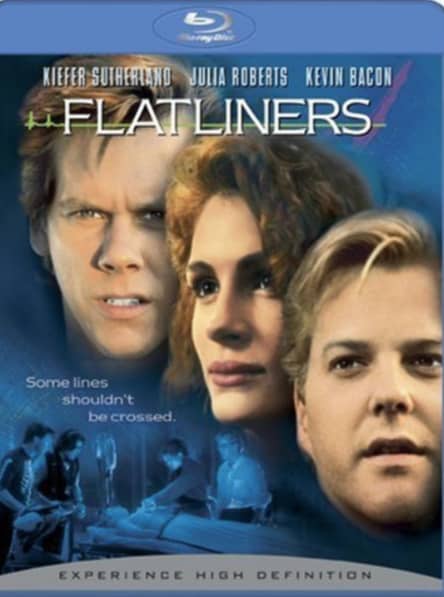 I choose to watch the movie Flatliners (1990), director Joel Schumacher because a friend mentioned that its theme aligns with my screenplay, Melissa.

In short, Flatliners is a highly entertaining movie with a near-death experience theme that has a spiritual twist.

Life after death has been one of the most intriguing themes in Hollywood since the first Frankenstein movie.

Flatliners is one such movie, except that it’s a horror drama with a strong spiritual message.

The spiritual core of the movie is represented as receiving negative karma for crossing a prohibited line.

That is to say, several students in the medical field experience the “cause-and-effect” Universal Law.

Certainly, the law is activated for the wrongs they committed, for instance, during their childhoods or in more recent times. The amount of suffering depends on how bad each sin was.

The plot’s flaw is a lack of personal motivation among each student to accept the extreme risk of the experiment.

The competitive game with the statement “who will be dead longer “is not strong enough to provide reasons for engaging in such a dangerous gamble.

The story could also be more powerful if it had drawn a link between the motivation to take the risk and the past deed.

Because this is a group of extreme risk-takers, it would be a good idea to introduce something in common among them, something that brings them all together in terms of their “life-after-death” urges.

For example, haunting dreams or psychological problems could result in their gathering together for a club focusing on “life-after-death experiences”.

everything you did matters

In conclusion, there is a strong spiritual statement in the movie – “Everything you did matters”.