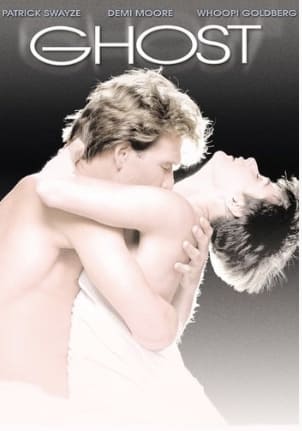 The Ghost (1990) , director  Jerry Zucker, is a supernatural thriller about life after death.

The story begins when Sam, the main protagonist, was murdered by his best friend, Carl.

Sam’s physical body was buried, but his soul stays alive and wanders around as a ghost.

Subsequently, the new existence is a new experience for Sam, and he not only has to adapt to it and protect his beloved girlfriend.

As a ghost, Sam leans new skills, for example, to go through material objects, such as walls or people, to influence the world around him by the power of his will, and to be heard by a psychic.

Meanwhile, after their death, Carl and his accomplice also become ghosts.

We see supernatural entities such as demons that came to Earth to take away both murderers.

The movie’s culmination is sad but positive – the murderers have been punished, and Sam is taken to Heaven by the power of Light.