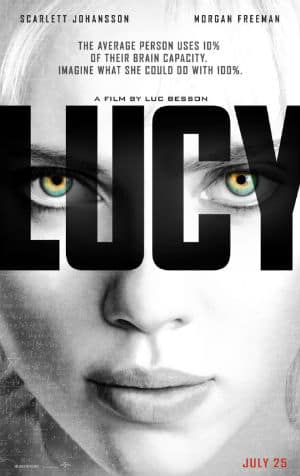 In short, it’s about the transformation of a man into a superhuman by brain’s upgrade from 3-10% to 100%.

Following some channelers, by the end of the fifth race, which includes you and me, a human had to use his brain at 50% capacity.

However, we developed only between 3% – 10% of it. For example, a worker on the assembly line using 3% and an academician around 10%.

The differences between the two seem huge. Firstly, the difference in behavior, and secondly, the understanding of reality. But the volume of knowledge accounts for only 7% of the difference!

And what if the limit is pushed to 100%? It will no longer be a human, but a superhuman, ready to reach the higher worlds of God.*

A young woman Lucy with an average brain ability, which is definitely below 10%, gets a quick upgrade to 100%.

We see a dramatic change in the protagonist from a half-drunk partier without clear goals and direction to a determined, powerful entity with abilities beyond imagination.

Channelers, however, claim that the process of thinking is much more complex.

That is to say, it includes a physical brain and several invisible structures such as an impulse ring and thin shells, in addition to a number of the soul’s matrixes.*

quality of the soul

The brain’s upgrade will not necessarily create a super humanistic person because their goals, motivations, and actions will depend on the quality of his/her soul.

This is what we see in the movie. Lucy receives supernatural strength, violently destroying everyone and everything standing in her way.

*Reference: Books series “Beyond the Unknown”, by Seklitova L.A. and Strelnikova L.L.