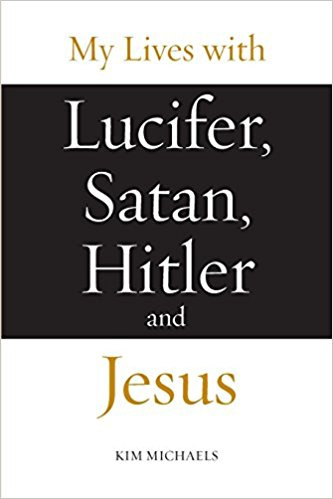 “My Lives with Lucifer, Satan, Hitler and Jesus,” by Kim Michael is an inspirational and encouraging novel with a revolutionary, unique concept beyond imagination.

This novel includes such spiritual concepts as karma, choices and consequences, sensitivity and consciousness, etc.

All ideas are described deeply with detailed examples.

the law of free will

Therefore, the author provides a thoughtful explanation of the law of free will. Similarly, he describes the free will from Lucifer’s and, on the other hand, ascendant masters’ points of view.

The second death, which is called spiritual death, is stated and explained in depth.

I also enjoyed a description of the complexity and variety of beings.

For example, Kim portrays humans as entities possessing several thin bodies besides the physical one.

On the other hand, alien creatures differ from humans’ existence and live on Natural planets.

However, the main reason I read this book was my serious curiosity about Jesus.

All my guesses about this great spiritual being were confirmed in Kim Michaels’ book and described in detail.

Therefore, that was the most inspiring part of this novel for me.

The author portrays the life of Jesus in the physical body and his journey as a spiritual being.
The description is done step by step and, most importantly, includes Jesus’ afterlife journey and his path to Ascension.

This story is quite different from what we all know from “official” sources.

However, the technical side of the book has some imperfections.

Firstly, the manuscript is long. Secondly, it’s written in a sort of free-flow memoir and has repetitive “loose” text.  With the help of a professional editor, it could be reduced in length by at least thirty percent.

In addition to improving the readability, it would help eliminate the occasional writing errors and misspellings.

Another area for improvement is that the book has a “heavy” beginning.

For instance, it contains several definitions of and abbreviations for the “bad guys” that are neither in line with the title of the book nor used throughout the book except, briefly, in one place.

Therefore, that part could perhaps be condensed in length or removed and placed in a separate book.

Meanwhile, approaching the end of the book, I asked myself: What is this book about, and what was the author’s main goal in writing it?

I concluded that 95 percent of the content described a problem (i.e., falling beings) while 5 percent described the solution, i.e., raising collective consciousness.

Further, at the end of the manuscript, Kim Michaels confirmed my answer – his goal was to deliver comprehensive information about the Darks.

Certainly, this brave explanation of who sets up suffering on Earth is needed.

However, just as sickness cannot arise in a pure body, Darks won’t appear at a high level of collective consciousness.

In other words, we need inspirational stories that help change the existing situation and a toolkit of HOW TO RAISE CONSCIOUSNESS.

In conclusion, I would like Kim Michaels to write a continuation of this book.

I wish that 5 percent of the new book would provide information about the problem (i.e., suffering) and that 95 percent – about the solution.  In other words, how to reach a higher level of collective consciousness and, as a result, our planet’s ascension?

In short, I’m looking forward to Kim Michaels, with the help of the Ascended Masters, could present detailed examples of the following:

Secondly, principles of Leadership. Besides, the role of women in society (if it’s applicable).

Among the billions of planets in the universe, some were similar to Earth, which raised their collective consciousness.

It would be nice to know the factors influencing them on their way to achieving it. Above all, their  Spiritual choices, leadership, and the role of women in raising consciousness.

We know that all the 195 countries on Earth have their own national mentality. That mentalities represent different levels of collective consciousness, and therefore the gap between the highest level and the lowest one is relatively big.

So, which values have the best nations followed throughout their history to achieve their current consciousness level? Also, which spiritual choices have they made, and, most importantly, what can be done to help the nations behind?

With its courageous and direct approach to many “hidden” topics and its revelation of a mystery about the Darks, the book “My Lives with Lucifer, Satan, Hitler and Jesus” by Kim Michaels is a valuable read for any spiritual seeker.