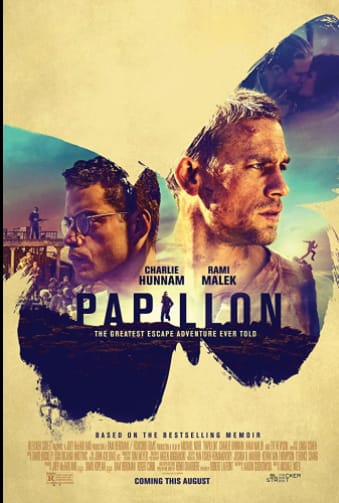 The film Papillon (2017), directed by Michael Noer, is worth watching by the whole family.

A keyword in this movie is FREEDOM.
Henri Charrière ( Papillon) was born in a family of the school teachers¹ in a small village.

His energetic potential was much higher than the environment where he has grown up; therefore, he leaves the village for better opportunities and appears in a big city.

However, instead of choosing an honest business with a hard-working approach, Henri takes easy money and joins the criminal world,  i.e., World of Darks².
He learns fast and becomes successful.

Even joining the criminals’ Papillon still has Free Will³, and he uses it to violates loyalty to his mafia “godfather”.

But, unquestioning submission to a boss is a prerequisite among the Darks.
So, the mafia immediately revealed Henri’s flaw, and he must be punished.
If he were a “Dark”, he would face the death penalty; however, since he was a “Light”, he generated negative karma and the suffering that followed.

Karma applies only to Spiritual entities with an orientation towards Light.
The world of Darks is harsh, and Henri’s “godfather” finds a witness who claimed that Henri killed a man.
By French law, Henri received a life sentence and was sent to a high-security prison.

Now a Spiritual Test from the Lights starts up.
Henri is forced to the Spiritual Choice: whether to die in prison as a slave (the direction towards Darkness) or escape from the jail for Freedom (the path towards Light). He chooses the second option.

Freedom is a base for all other intangible values of Lights, such as Love, Peace, Courage, Hope, etc. Following rejoin Lights, Henri must pass the test.

The film doesn’t tell us what Papillon feels, but his desire for Freedom is remarkable. He is given a multi-stage exam where each new step is much more complicated and riskier than the previous one.

His desire to survive is incomprehensible to the prison head, who gives rise to inhuman torment for Henry.

The film’s ending is very positive and inspiring optimism – Henri reaches his Goal – he got his Freedom.
Achievement of Freedom ( Value of Lights)  gives him a chance to return to the Lights and continue his journey towards intangible values of Light.

In conclusion, our Spiritual Father welcomes all of us to His Hierarchy of Lights. However, there is no easy way to enter it. You have to prove your will not only by saying but also but doing.

A Spiritual choice giving to us is a way to test us.
During a physical life’s existence, a spiritual entity is supposed to pass several Spiritual Tests coming as Spiritual Choices.

A test becomes more difficult if a soul makes a mistake and gain negative karma. For example, Papillon complicated his life scenario by joining the mafia world.