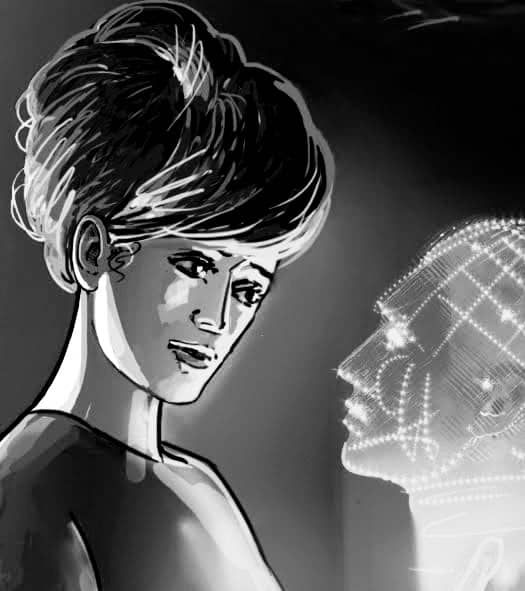 In the fifth excerpt from the Redemption novel, Ann requested Rob to explain the reincarnation principle to her.

“Tell me all about it,” Ann asked, steering her car through the city center. “I want all the info you’ve got on the reincarnation chain thing.”

She’d left the café slightly later than expected and decided it wasn’t worth returning to the office. Instead, she went on a drive to clear her head and mull things over with a little help from Rob.

“Certainly, my lady,” he said, bowing his head slightly. “As you know, it has to do with your lifestream, which is made up of many individual lives. It’s a cycle of reincarnation. Birth, life and death, rebirth, life, and death.”

“No. Each life is built on the former lives, progressing towards the ultimate goal.”

“Of breaking free from the chain,” said Ann, interrupting him.

“What was it you called it again? It was named after a classic rock group, wasn’t it Oasis or something?”

“Nirvana,” said Rob, suspecting Ann was playing with him. “And the band was named after that ultimate goal, rather than the other way round.”

“So, is everyone caught in this reincarnation chain?”

“And my work colleague, Peter?” Ann asked after a moment of thinking.

“Of course. He will have had other lives before he was Peter, and no doubt he will have many lives after this one, as will you, my lady. And at this speed, that next life may come sooner than you expect.”

Ann glanced at Rob, frowning, “What do you mean?”

“The car,” said Rob. “You are traveling twelve miles an hour above the specified limit for this road.”

Ann sighed, easing her foot off the gas. “Driving too fast, moving too slow. I have to say, Rob, I don’t feel like I’m making much progress at the moment.”

“That day will come,” he replied, dishing out his most charming smile. “You just need to be patient, my lady. The little things matter just as much as the big ones. They all work together in the process of karma.”

With barely a moment’s hesitation, Rob said, “Well, let’s take your visit to the hospital this afternoon. You didn’t have to go and see your injured colleague. And yet you took the time to do it.”

“What little good that did do? Peter didn’t even know I was there.”

“That is not what matters when it comes to karma. Whether people see your good deeds or not is of little consequence. It is what God sees – that counts.”

“So, even little things help in my progress towards Nirvana? That’s certainly nice to know. But, still, I feel like I’m running on empty at the moment.” She paused at a set of traffic lights, momentarily lost in thought. “Rob,” she said suddenly.

“Do you think I should carry on with this whole process of unearthing my past and finding out about my lifestream, about my true self?”

Ann flicked the indicators to signal right and set off from the lights as if coming to a decision. “Can you map out the best route to the psychic’s place?”

To Find other Excerpts: First, the Second, the Third, the Fourth, the Six.