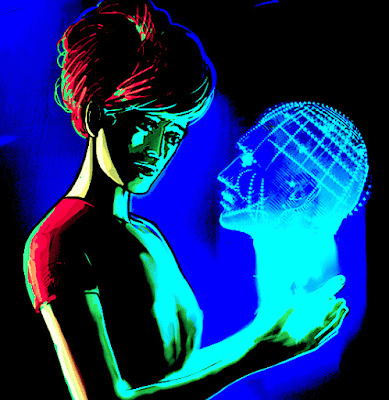 In the fourth excerpt from the Redemption novel, Rob explains to Ann the spiritual purpose of sacrifice, the connection of positive karma with redemption, and the intangible value of Freedom and Love.

“I don’t understand it, Rob,” said Ann as she stepped out of the shower. “I had expected these nightmares to stop after going to the psychic. Several weeks have passed but the dreams are more worrying than ever. It’s gotten only worse instead of better.”

“That is all part of your journey, my lady,” Rob replied, looking at her from the screen of the e-device set by the sink.

“Consider the Buddha’s path from the golden palace to enlightenment or Jesus’ journey through the cross to the resurrection. The greater the destination, the harder the journey must be,” Rob said morally.

Ann considered this while drying herself with a fluffy towel. “I guess I can accept that,” she said eventually, “but from what I’ve seen on my two visits to the psychic, my – what did she call it?” she looked up and cleared her throat.

“Yeap!” Ann perked up. “My reincarnation chain has hardly been a series of victories. In my first life, I lost my son days after giving birth to him and ended up killing myself. And in the second I failed to save the woman I loved and died of a heart attack.”  She considered and continued. “I achieved nothing!”

“Nothing?” Rob raised his eyebrow and shook his head. “But, my lady, sacrifice has always been a necessary part of the greatest journey.”

Ann stopped drying her hair to look questioningly at him. “Sacrifice?”

“Of course, sacrifice! Or did you think you gave up those lives for no reason?*

“Well…” she continued drying her hair as she tried to think. “Maybe,” she conceded. “But I didn’t really achieve anything. I didn’t get Wu back or save Alfreda. Even if I did sacrifice myself, what was it all for?”

“Answer this then: when you were living in the Stone Age, why did you die?”

Ann shrugged as she picked up her e-device and headed back out into the bedroom. “Because I shoved a spear through my heart.” She winced again at the memory of that sharpened stick pushing into her body and placed a hand on her chest.

“No,” said Rob, now watching her from the bedside table. “That was how you died. I asked why.”

“Because that big murdering bastard was going to get me!” Ann jabbed crossly at the SmartHome screen on the wardrobe, selecting a red trouser suit.

A wooden panel slipped back and the requested suit slid out on a rail.

“And what was that ‘big, murdering bastard’ going to do with you?”

“I don’t know,” she said, pulling on the underwear that had appeared through another panel. “Rape me? Beat me? Keep me as a slave wife?”

“All of the above, no doubt. So why did you decide to kill yourself?”

“Well, it’s obvious, isn’t it? Death has to be preferable to such a life,” she glanced at Rob. “I died for freedom.”

“For freedom!” Rob perked up and raised his index finger. “And what about your death as the Roman priest?” he continued.

“That was a heart attack, wasn’t it?”

Rob gave her a long meaningful look as Ann pulled on her trousers and tucked in her blouse. “Again, that was how you died. Ask yourself why.”

“Cause I’d been running too long and overexerted?”

“Okay… and why had you been running?”

“To save Alfreda’s life, to rescue the woman I loved.”

“So why did you die? For what reason?”

Ann finished buttoning up her jacket and stood up straight, suddenly realizing what Rob was getting at. “I died for love.”

“Exactly!” said Rob with a beaming smile. “You sacrificed yourself for Freedom and for Love. That’s good karma right there, my lady, huge steps on the path to redemption.”

“Redemption?” Ann looked puzzled for a moment, trying to remember where she had heard that word recently. “The psychic mentioned that at the end of our last session when she was going on about reincarnation chains and other weird stuff.”

“Perhaps it would be worth talking with her again and finding out what she meant?”

“I’m not so sure, Rob,” Ann said, picking up the e-device and walking towards the front door of her apartment. “My past lives might not have been pointless, but that doesn’t change the fact that my nightmares have gotten worse since I went to see that old woman. I don’t want to risk them getting even worse!”

“That’s entirely your choice, my lady. It is your life—your journey—and only you can make that decision.”

To Find other Excerpts: First, the Second, the Third, the Fifth, the Six.