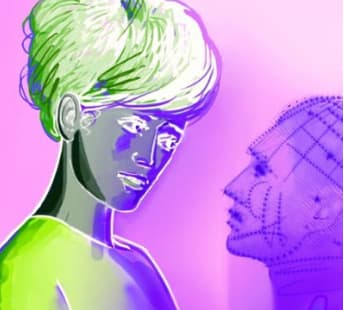 In the sixth excerpt from the Redemption novel, Ann continues to ask Rob about Fate, Free Will, and their relationship to Spiritual Choice.

Ann thought about this as she disconnected from the tunnel’s SmartDrive and headed towards the exit.

Could this really be true? Had her life in twenty-first-century America really been shaped by the lives of Mi, Ra, and Isabelle? Had there been other past lives that had also affected her right now?

“So let me just get this straight,” she said, merging with Chicago’s traffic. “My fate is already set, but it has been shaped by the choices I’ve made in past lives. Right?”

“Exactly,” said Rob. “The reason your Creator gave you Free Will in the first place was to make you each different, unique individual instead of uniform robots produced in some divine mold.” He put on a sad face.

“Unfortunately, I have run out of gold stars,” he winked at her.

“Pity,” said Ann with a smile. “I was doing rather well! Explain more about the correlation between fate and Free Will. Can they really work together?”

Rob seemed to ponder this for a moment, though Ann knew this was just part of his programming; he could analyze many terabytes of data in a fraction of a second.

“Fate and free will work together well. You’ve been given free will so you can choose your personal direction, but your choice does not remove the next milestone of your fate. In another word, you still have to come to that next programmed point.” Rob eyed her from the screen, noting the thoughtful look on her face.

“Consider this,” he continued. “We are on our way to the supermarket, which, if you turn right at the next crossroad, we will approach from the South entrance. However, if you choose left instead, you will approach it from the North. However, your purchases will not be affected by this, and you will still end up going to the shop. This is similar to fate and free will. You cannot escape your fate, but you can choose how you face it.”

As he finished, Ann found herself at the traffic lights in question and looked in each direction. “So, what difference does it make to me in the course of my life if I turn to the right or left?”

“Well, as far as your soul is concerned—that being the part of you that goes from life to life—it’s not so much about right or left as it is about Light or Darkness,” said Rob. “However,” he added, with a wink, “turning right would bring us to the supermarket 5 minutes quicker than turning left.”

“Thanks,” said Ann, pulling away to the right. “Carry on. What difference do Light and Darkness make to my soul, then?”

“This is where Nirvana comes in. By choosing a direction toward Light, your soul is enlarged, progressing toward enlightenment and ultimate redemption. But when you choose Darkness instead, your soul becomes heavier, heading deeper into the gloom of brutality.”

Ann turned the car into the parking lot. Switching off the engine, she picked up the e-device to give Rob her full attention. “It sounds like we’re talking more about spiritual choices, rather than deciding which way to head to the shops?” she asked with a  broad smile.

“So, what effect does a spiritual choice have on a person in a material sense?”

“My sources tell me that as you progress towards enlightenment, by making choices for Light, your eyes are more open, able to see the things which you would never have noticed before. You gain a greater understanding, broader insight, and a heightened ability to see what is Light and Darkness and make the right choices easier. On the other hand, choosing Darkness affects every area of a person’s life for the worse. His insight is narrowed, and his capacity for vision and creativity are diminished.”

“So making the right choices is pretty important!” said Ann. “How can I ensure I don’t end up making the wrong decision?”

Edited on January 2023. Find the original.

To Find other Excerpts: First, the Second, the Third, the Fourth, and the Fifth.