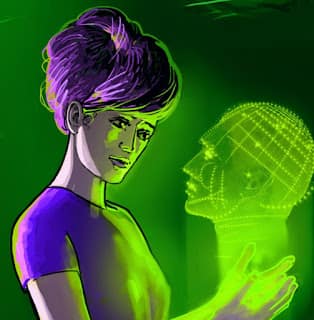 In the third excerpt from the Redemption novel, Ann questions Rob about Spiritual matters such as God’s purpose for humans, Karma, Nirvana, and how many lives one needs to reach it.

“Well, that was a most enjoyable vacation,” Ann said as she steered her car away from her apartment building. “Though I’m not entirely certain I could call it restful!”
Rob’s face appeared on the screen, smiling broadly. “Quite,” he said. “You sure managed to pack plenty into a couple of days!”
“To be honest, I’m relieved to be returning to work. It’s as though the craziness of the last two days is finally being replaced with some kind of normality.”
That being said, Ann’s sleep had been disturbed once again by one of her usual haunting dreams.
She had hoped her visit to the psychic would have dealt with all that, but she’d had that same vision; the infinite spiral holding her in its grasp as it stretched away through time and space. The only difference was that, far in the distance, she felt that it connected her with Mi.
“Rob?” she asked, as she pulled onto the express tube and switched the car’s systems over to the tube’s SmartDrive server.
“Yes, my lady.”
“Did you find out a lot of information on the… hmm.. spiritual stuff we were talking about the other day?”
“Of course.”
Ann paused, not sure what she wanted to ask, or at least what she wanted to ask first. “Do you believe in Evolution? Or in the whole Adam and Eve, God made everything in seven days… stuff?”
“I think you’ll find that it was actually six days. And the answer is yes. I believe in both of them – in Evolution and in God.” Ann frowned and, with the car now safely in the control of the SmartDrive, reclined her seat and turned to face Rob’s screen. “Come on! How can you believe both?”

“Because they appear to contradict each other?” he winked at her. “It’s quite simple. In fact, many humans believe in both without thinking.”

“Sure. Take, for example, the fact that most people believe in Free Will, yet at the same time consider themselves to be in some way under the influence of a higher power such as fate or God. You make your own choices, but live out a specific purpose defined by someone else.”

“I see.” Ann turned her gaze back to the windshield, which was now displaying one of the many “environments” provided by the SmartDrive system. At present, it was set to Ann’s favorite, sunlit waterfalls, which helped her to relax and concentrate. “So,” she continued, “what has your research turned up? What is God’s purpose for us humans?”

“It’s hidden for the blind, my lady,” he smiled broadly. “And yet open for those who have a vision.”

“Firstly,” said Rob, with a slightly mischievous smile, “We’re dealing with secret knowledge here, an experience which is different for each person and the only way to attain it is to earn it.”
“And secondly?” she asked skeptically.

“Secondly, a person must at least be interested in such knowledge.”

“You are now. But this wasn’t always the case, my lady, and this is sadly true for many people. They are too busy to think about the purpose of their existence because they spend all their time focused on earning money, sorting out family problems, fighting with neighbors, or any of a thousand other things. Across the city people are sitting in traffic jams; the same is true of their lives. They are too caught up in the worries of their existence to really live!”

Rob smiled suddenly. “We, however, seem to be moving quite freely.”

Ann glanced out of the window. He had a point. Sure the tunnel was pricey, but it was much better than being jammed up on the city streets with everyone else.

“Why did freedom always come at a cost?” she mumbled under her breath. “Did you say something, my lady?” Rob quickly reacted.

“Well, this is fascinating, Rob. I’ve never heard anything like this, not in school or college… not anywhere.”

“That’s because you’ve been too busy, just like everyone else. But now you are on the way not only to discovering your purpose but fulfilling it!”

“But I’m still pretty busy, Rob” Ann stared at her Artificial friend. “So how do I go about all of this? Should I go to a church or something?”

Rob raised his eyebrow at the question. “Go to church? My research suggests that such organizations have mostly become infected by the same evil – they’re busy too. They focus on quantity rather than quality. They tend not to serve individuals so much as expect it to work the other way around. But…” He paused.

“But you have already made some progress! You are exploring your truth by yourself.”
“I guess.”

Ann took the wheel again as the waterfalls on the windshield gave way to the smooth interior of the tunnel. They were approaching the exit.

“But these religious organizations must have something to say about the general purpose of our existence, no?”

“Certainly. And as you’d expect, there are many conflicting points of view about it, from those who believe humans exist to bring glory to God to those who believe people are nothing more than some cosmic accident, without purpose or meaning.”

Ann thought for a moment as she disconnected from the SmartDrive server and steered the car up the exit ramp towards the street.

“Well, I guess, in a way, that’s what I’ve always assumed. Though when you put it in those terms, it sounds pretty bleak.”

As she emerged from the tunnel and merged with the Chicago traffic, another car nearly drove into the side of her and she beeped the horn crossly. “Idiot!” she shouted.

“Quite!” Ann tried to concentrate on what they had been discussing, wishing she still had the calming waterfalls to help. “So what about those who believe in God? What do they say? What is it… living for His glory?”

“That depends. Christianity teaches that such a life is based on a relationship with the Creator acknowledging His greatness, and giving Him honor by praising and worshipping Him.
Their aim, most of them anyway, is to love God more and so live in a way that makes him look great. That is what they mean by ‘living for his glory’.”

“So, how is that supposed to work?” asked Ann, frowning with a mixture of confusion and frustration.
“And how long does it take to be changed in such a way?”

“It is supposed to work the same as in any other relationship; though most do not involve people trying to love someone they can neither see nor touch. The process is said to take the whole of a person’s life.”

“One life,” said Rob with a nod. “Their Holy Bible says, ‘it is appointed unto men once to die, and after this cometh judgment’”.

“Cometh?” Ann laughed. “Why can’t they speak English, like everyone else? So what about people who believe you live more than once?”

“Reincarnation? He started up. That is more of an Eastern concept, taught by the Hindus, Buddhists, and suchlike.”

Ann turned the car around the last corner towards the A.I.I. building. “The rock band?”

“Hardly,” Rob smiled. “Those religions that believe a person has many lives teach that the goal of those lives is to achieve Nirvana, ultimate freedom from all that is evil. Becoming one, as it were, with everything, even with God himself.”

“Okey! And how do they achieve this Nirvana?”

“By living increasingly pure and disciplined lives. Each life, you see, influences the further ones. They call it karma.”

“I’ve heard of karma,” said Ann, pulling up in her usual parking space and cutting the engine. “So how many lives does it take to reach Nirvana? Would two be enough?” she glanced at her AI pal.

“No one knows,” said Rob as Ann picked up her e-device from the dash. “The cycle of birth and death is continuous throughout time, but I suspect Nirvana cannot be achieved with only a couple of lives.”

Ann switched off the e-device and slipped it into her bag as she headed towards the elevator. And while she traveled up to the Sales and Marketing floor, she wondered to herself how many lives she had had already and how many are still ahead. And were there other past existences affecting her life today?

To Find other Excerpts: the First, the Second, the Fourth, the Fifth, and the Sixth.