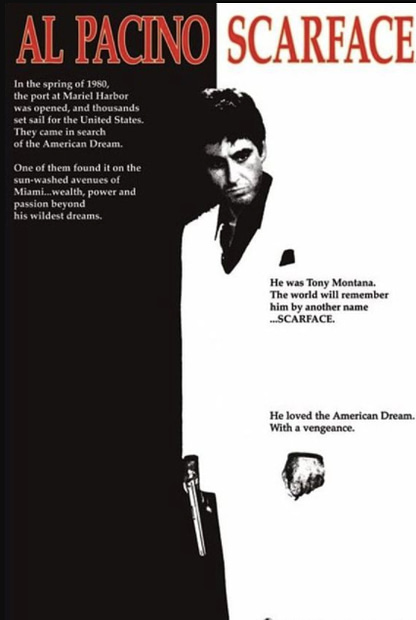 A key phrase in the movie Scarface (1983), director Brian De Palma, is a Spiritual choice towards Light.

The main protagonist, Tony Montana, immigrates from Cuba, the limited opportunities country, to the USA, the land with the more significant potential for survival.

However, in America, he doesn’t want to work as a dishwasher, and his ambitions lead him into the mafia world.

He has a mature soul, which allows him to see right through people, situations, and environments and draw the right conclusions quickly.

In other words, the ability to separate the chaff from the grain gives him a vision of how to get success.

Above all, he doesn’t murder people based only on suspicions but instead prefers to double-check and only after that to make tough decisions.

Wealth does not make him more lazy or relaxed. He knows the value of his achievements and prefers to recount the earned money himself and look for the most profitable financial transactions.

He respects women in his way and takes care of his younger sister, which is younger not only by her age but also by her spiritual experience, as she is a very young soul.
Besides, he goes for marriage, not because of lust or pride but because he wants to have children with the woman he likes.

The climax of the film is Tony’s Spiritual Choice.
Spinning in the world of Darks, he knows the consequence of his action against them.  Non-compliance with the essential agreement has only one result for him – his death. Despite this, he decides to save the lives of strangers –  two children and a woman.

In conclusion, a Spiritual Choice is always a test. The Higher Powers never rely on what people think or talk about a person, but they test him through his choice in the situation they prepared for him.

The situation* is designed in line with the level of consciousness of a person, and the person is involved in this situation unconsciously, so he cannot avoid it.

In this film, the Spiritual Choice is unique because the protagonist got only a fraction of a second to make his life-death decision.

Find more about the Spiritual Choices in the Redemption novel.
* Source of the info:
The choice of the soul, Seklitova Larisa, Strelnikova Lyudmila