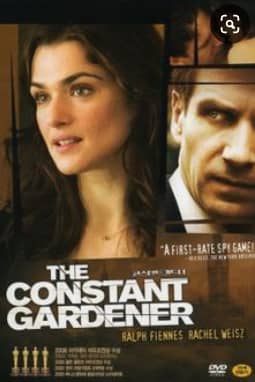 The keyword in the movie, The Constant Gardener (2005), director Fernando Meirelles, is Justice.

The year is 1990. Our Earth is shown as a very dense planet with a low level of collective consciousness.

While some countries developed a higher level of consciousness, Kenya, a country on the African continent, was a land with an extremely low collective consciousness.

That is to say, Kenya’s consciousness was so low that the value of human life was close to nothing.

However,  Tess, the protagonist’s wife, is determined to see JUSTICE.

With a high probability, she could be an avatar, one who embodied herself on Earth to help Kenya’s inhabitants as much as she can.

As a result, she uses every possible method to achieve this goal.

The corrupt Kenyan government doesn’t have the capability or will to improve its nation’s living conditions. Therefore it pursues personal short-term targets, throwing everything and everyone on its own.

Meanwhile, the Darks* from the West discovered an opportunity to create a huge profit primarily by abusing the human rights of ordinary people in Kenya – the right to one’s own life.

So, driven by the highest intangible values as FREEDOM, JUSTICE, AND COURAGE, Tessa makes a difference and pays the highest price she can – her own life…

To sum up – an excellent movie!

Note: Darks are the embodied spiritual entities with an orientation towards Darkness.