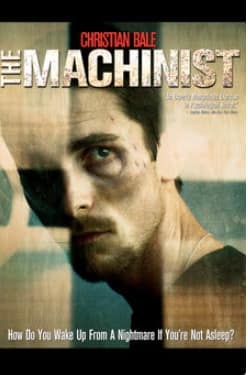 “The Machinist (2004)”,  directed by Brad Anderson, is a high-quality movie with spiritual elements.

The main character, Trevor, committed a crime a year ago.

He has been able to hide his actions from people’s jurisdiction, but not from the Universal Law of Karma.

So, the generated negative karma pushes him to pay for his did.

Sometimes, the karmic retribution occurs in future lives, but in Trevor’s case, it happens in his current existence.

Besides, Trevor must pay not only through the suffering of his physical body but also mentally.

But what happened with Trevor from the spiritual point of view?

Our soul is an energy carrier and a container, consisting of three parts – positive, negative, and controlling*.

In the normal state, the positive and negative parts occupy approximately the same volume. A person in this state fluctuates between good and evil.

However, in the case of a good deed, a portion of the energy flows from the negative section to the positive.
Similarly, with a bad deed – the negative part becomes bigger.

a split of personality

In Trevor’s case, due to the severity of the crime, the negative side grew so quickly that it split his personality.

As a result, Trevor gets a psychological disorder.

His hallucinations lead him to the interaction with Ivan, a brutal and unpleasant man invisible to other people.

At a certain moment, Trevor ( controlling part of his soul) realizes that the ruthless man is a fraction of himself. That is to say, the transformation that happened to him due to his sin.

Realizing this awakens his memory and causing an internal protest (his positive part), so Trevor announces his crime to the police.

Laws of the Universe

Summarizing:
“The Machinist” is one of the best psychological thrillers of Brad Anderson.
It presents the complex structure of the human soul and man’s dependence on the  Universal Laws.

With a superb performance by Christian Bale, it must be watched to the end.

* References to the L. A. Seklitova, L.L Strelnikova books “The matrix is the basis of the soul” and “The formation of the soul or paradoxical philosophy.”

Find my rating in IMDb