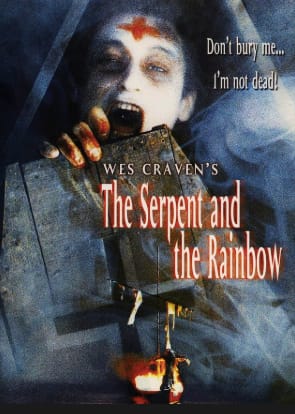 The film “The Serpent and the Rainbow” (1988) by director Wes Craven is based on a true story in Haiti, in a small country near Cuba.

Logline: An anthropologist goes to Haiti after hearing rumors about a drug used by black magic practitioners to turn people into zombies.

One of the main characters in the film is the sorcerer. He is a mature spiritual being moving towards Darkness.
In other words, he has a high energy potential, and he doesn’t hesitate to use it for his benefit.

For example, the sorcerer, using magic, can transform a human into a zombie.

So, how does he do this?

Most likely, he is well aware of the energetic structure of a human being*.

Firstly, by giving a death potion to a man, he allows thin bodies with higher energies* to leave the corpse. Further, he revives the low-energy shell or shells** of a man.

Consequently, the sorcerer receives a spiritually disabled person with remnants of memory and emotions.

As a result of these manipulations, he gains control of the victim and turns him into his slave (slavery is a Darkness’s feature).

In conclusion, we must admit that the film shows how complex a human’s energy structure is.

Moreover, it reveals the existence of the soul and its significance for a man’s existence.

Most importantly, the movie’s title, ” The Serpent and the Rainbow,” refers to what we all experience in physical reality – we live in a world of Satan, pretending to be talking about God.

In short, this is a great movie, highly recommended for any spiritual seeker.

**The lower bodies are: physical, ethereal, astral, and mental.

Reference to the book “Energy structure of man and matter” by L. Seklitova, L. Strelnikova.