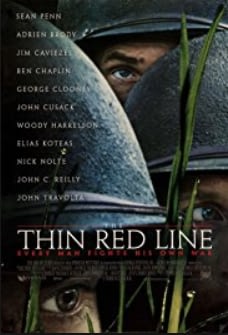 This is a spiritual review of the movie Thin Red Line (1998), director Terrence Malick

Our world is built on a male model of consciousness.

While a little girl would choose a doll from a pile of toys, a little boy would prefer a toy soldier or gun.

the concept of war

As a result, the concept of war is embedded in our low-conscious world.
Therefore, ignoring a partnership, we use war to solve a problem and an army as a tool for achieving the desired goal.

The war between the U.S. and Japan is no exception.

Most importantly, the military, with no free will and no value for human life, is a “product” of Darks. So, unquestioning obedience to the superior and the absence of compassion are the main features of an army.

In the Thin Red Line, driven by compassion, the captain refuses to comply with the general’s order to lead his soldiers to certain death. In other words, this is an expression of his free will, which is prohibited in the army.

At the end of the day, the captain completes the combat mission and saves soldiers’ lives, i.e., resources.  Instead of receiving a reward, he is demobilized from his team.

At the end of the campaign, the captain completes the combat mission and saves soldiers’ lives, i.e., resources. However, Instead of receiving a reward, he is demobilized from his team.

not tolerance to freethinkers

Thus, Darks do not tolerate freethinkers. Instead, they need those who obey every order without questioning it.

Meanwhile, the pacifist Pvt. Witt is also an interfering element in a military machine. So, his courageous act of saving others – and his ensuing death – do not come as a surprise.