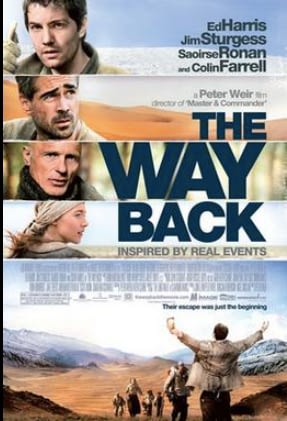 The keyword in The way back ( 2010), director Peter Weir,
is Partnership.
The protagonist, Janusz, driving by Courage and Freedom, escapes from the Soviet labor camp deep in Siberia.

During his journey, together with a group of other prisoners, he also demonstrates Kindness, a little brother of  Compassion.
As Courage, Freedom, and Compassion are the highest intangible values of Lights, we can conclude that Janusz is a spiritual entity moving towards Light.

a representative of Darks

However, there is another exciting personage in the Janusz team.
It’s a criminal, thief in law Valka. This man is a typical representative of Darks.
Why the man is representative of Darks? Firstly, he has a jail-bird’s behavior pattern; secondly, he is not a mature soul, as he is looking for a godfather, and also Valka uses a thief’s slang.
Janusz was exiled as political. The young man has a high energetic potential; Valka sees in him an authority and asks him to become his godfather.

At the beginning of the journey, Valka’s dream was to escape to the USA, but he drops this idea because he doesn’t know what he will be doing in the country of Freedom.
This statement once again confirms his spiritual direction towards Darkness, as Darks prefer Slavery, and they don’t see any value in Freedom.

In other words, even people with different qualities and values can get positive cooperation if they pursue a common goal.