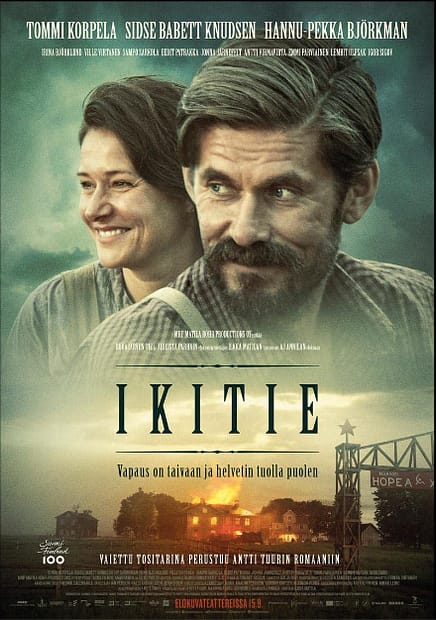 Spiritual Movie Review by Jacklyn A. Lo – The Eternal Road.

The Eternal Road is a great period film with a masterfully told story about Spiritual Choice.

The uniqueness of the film is that it does not show a superhero, but an ordinary guy, like many of us.

Two things are most impressive in the story – the spiritual choice of the protagonist (Jussi) and the fact that the United States never asked Stalin questions about the fate of American Finns who emigrated to the Soviet Union o build “Workers’ Paradise” and that were killed on Stalin’s orders.

As always, there is a way to improve the plot. It would be great not just to show the portrait of the “father of nations” hanging on the wall, but to explain the reason why he killed those innocent, but naive people, who came from far for a better future.

And the reason was that coward Stalin was afraid of any manifestation of Freedom and Hope, that the immigrants brought with them from oversee.
It would be nice to show how Stalin paranoidly wanders around his huge residence in search of a safe haven. After all, he was terribly afraid of an attempt on his life and never slept twice in a row in the same room.

Jussi’s spiritual choice is shown at the end of the film when he meets his enemy Kallonen. Jussi has a knife to take revenge on this low man responsible for the death of innocent people, including his young son and wife. However, Jussi, who has gone through hell, remains free from the dirt of revenge and leaves Kallonen alive.

In the film, unfortunately, that episode is shown briefly, without an actual dialogue between Jussi and Kallonen, and yet, Jussis’s Spiritual Choice is a culmination of his self-development.

And of course, you are wondering – if the United States of America had opened a case about the massacres of national minorities in Stalin’s Russia in the 30s, there might not have been subsequent repressions and killings on a national basis, as happened in subsequent history and happening right now? And was indifference the choice of the nation?

Check Out the Featured Screenplay Melissa